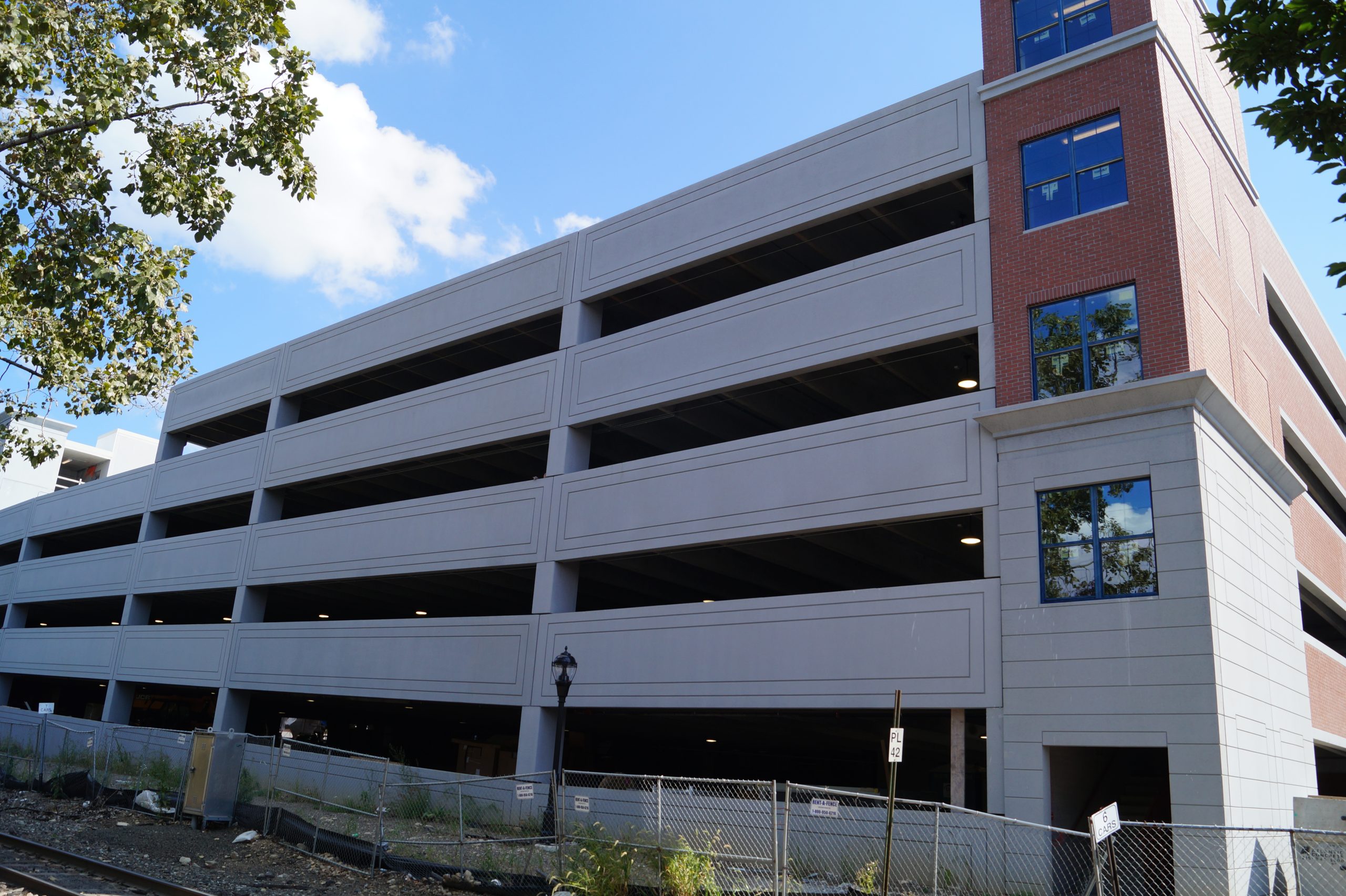 Lateral seismic and wind loads significantly influence the selection of structural framing for precast parking structures. While it is not always the case, seismic loading usually controls the lateral design because it is a direct function of the mass of the structure, and robust precast concrete structures are naturally more massive than many other building materials. The primary methods of resisting lateral loads in structures are “X” braces, moment frames, and shear walls. Shear walls are a very efficient solution for minimizing lateral drift and are commonly used in precast parking structures to resist lateral seismic and wind loads.

This narrative is intended to assist architects and engineers by addressing important structural and construction considerations related to the design of the shear wall panels. For further information on a “high altitude” perspective of how the architectural and structural selection of precast framing affects other important functional and serviceability aspects of the parking structure, the reader is directed to a companion document entitled Seismic & Wind Loading For Parking Structures – Shear Walls & Openness.

Before looking at some examples, here are some very basic observations to keep in mind…

In the examples that follow, we will assume a parking structure located in Philadelphia, PA. The scope of this narrative is limited to very general concepts and is not intended to be an exhaustive presentation of seismic design methodology. Nonetheless, the following seismic design parameters were used to arrive at the order-of-magnitude of the forces shown.

In Example 1A shown above the minimum length of the shear wall stack is 16’-0” and it supports gravity loading from the precast beams behind. Collectors will likely be required at each end to fully capture the diaphragm shear, and the approximate tensile and compressive forces are 648 K (i.e.: the equivalent of twelve #9 bars). To show the effect when no gravity loading is present except the weight of the shear walls themselves, no precast beams are shown in Example 1B. A 16’-0” shear wall stack can still resist the lateral loads, but the approximate tensile and compressive forces increase to about 1,097 K (i.e.: the equivalent of sixteen #10 bars). This is a 69% increase just because the dead load has been eliminated!

In Example 2A shown above the shear wall stack is lengthened to 36’-0” to eliminate uplift forces. The base shear has increased from 606 K in Examples 1A and 1B to 886 K because the stiffness of the structure has increased considerably. While this might not appear to be significant a 36’-0” shear wall when compared with a 16’-0” shear wall is (36.0)³ / (16.0)³ = 11.4 times stiffer. Example 2A takes advantage of additional gravity loading from the precast beams behind, but Example 2B shows how elimination of this additional dead load requires the shear wall stack to increase from 36’-0” long to 59’- 0” long to eliminate uplift forces.

Another option to consider is depicted in Example 3 shown above. This is a compromise to reduce the uplift forces while providing for more openness on the exterior of the structure. The ends of the shear wall contain the tensile reinforcement while the middle behaves as a discrete “column section” to support the gravity loads from the beams behind. It is beyond the scope of this narrative to address all the structural design requirements, but it is needful to resolve all the vertical and horizontal shear, tensile, and compressive forces through the net concrete section.

In the event the geometry of the structure, number of stories, site conditions, proximity to other structures, etc. preclude the use of broad, shallow foundations such as these then deep foundations need to be utilized. This usually permits a smaller footprint for the pile cap but will undoubtedly result in uplift forces that rely upon tension piles to resist the uplift forces through the action of shaft friction along their length, engagement of helical bearing plates, or by bonding the piles into rock.

Nitterhouse Concrete Products, Inc. in Chambersburg, PA, is a family-owned company serving the construction industry since 1923. Give us a call at 717-267-4505 or visit our website at www.nitterhouseconcrete.com for information on more quality precast, prestressed products to meet your design and construction needs. Choose with confidence and make NCP your single source for precast – what you need when you need it.